History of the Linn Cove Viaduct by the National Park Service

One of the most beautiful drives through the Fall colors is on the Linn Cove Viaduct. Circling around Grandfather Mountain, it is worth the drive to enjoy the views! 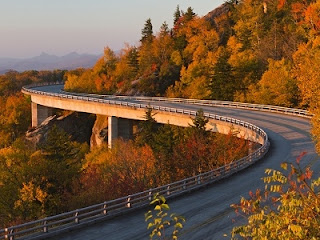 The below is courtesy of the National Park Service and covers the history of the viaduct.
Viaducts are elevated roadway sections carrying the road high above dry ravines or across the shoulders of mountains where extensive and aesthetically unpleasing fill sections would otherwise be required. The earliest of these is the Rocky Mountain Viaduct, constructed in 1937, on the northern section of the parkway at milepost 35. This steel girder structure is supported by arched stone piers and stone-faced abutments, and is the only viaduct to feature this treatment. Most other parkway viaducts are steel girder structures supported by reinforced concrete or steel piers. Text excerpted from "Highways in Harmony" publication produced by Historic American Engineering Record (HAER), in cooperation with the National Park Foundation
As the last piece of the Parkway to be completed, the Linn Cove Viaduct was a peak of Parkway engineering and environmental protection. Completed in 1983 at a cost of almost $10 million, the Linn Cove Viaduct is 1,243 feet long and contains 153 segments weighing 50 tons each. The American Society of Civil Engineers designated it a National Civil Engineering Landmark (Highways in Harmony). Visit the Linn Cove Viaduct (Milepost 304) to experience this engineering feat in person.

The exact route location of this segment, commonly referred to as the "missing link,” created a lengthy and heated controversy between private individuals and the National Park Service. Finally, North Carolina Governor Dan K. Moore negotiated a compromise location. A key factor in this controversy was environmental concern over Grandfather Mountain. Engineers were faced with a serious question: How do you build a road at an elevation of 4,100 feet without damaging one of the world's oldest mountains? National Park Service landscape architects and Federal Highway Administration engineers agreed the road should be elevated, or bridged, where possible to eliminate massive cuts and fills. Figg and Muller Engineers, Inc. developed the bridge design and construction method. The result: the most complicated concrete bridge ever built, snaking around boulder-strewn Linn Cove in a sweeping "S" curve.

In order to prevent environmental damage and to allow construction to continue during severe winter weather, builders pre-cast sections indoors a few miles from the site using a process known as "match casting." Each new segment was cast against the segment preceding it. The viaduct itself was the only access road for construction. Each pre-cast section was lowered by a stiff-leg crane and epoxied into position against the preceding segment. Steel cables threaded through the segments secured the entire bridge deck. The viaduct was constructed from the top down to minimize disturbance to the natural environment. This method eliminated the need for a "pioneer road" and heavy equipment on the ground. The only construction that occurred at ground level was the drilling of foundations for the seven permanent piers, on which the Viaduct rests. Exposed rock was covered to prevent staining from concrete, epoxy, or grout. Tinted with iron oxide, the concrete blends in with the existing rock outcroppings. The only trees cut were those directly beneath the superstructure.

Although the Blue Ridge Parkway’s construction began in 1935, construction of the Linn Cove Viaduct was delayed until 1979, when Congress finally approved funding. In the meantime, other portions of the "missing link," most of them north of the Viaduct, were completed bit-by-bit between 1968 and 1987. In addition to 12 bridges, the 7.5 mile section includes a dozen parking overlooks and the 13.5 mile Tanawha Trail, stretching from Beacon Heights to Julian Price Park. A ribbon-cutting dedication ceremony on September 11, 1987, heralded the completion of the Parkway and the end, too, of a narrow and crooked 14-mile detour around Grandfather Mountain via the Tonahlossee Trail (U.S. 221). The final section is not only a triumph of engineering and sensitivity to the environment; it is a joy to drive, safe but thrilling. Hugging the contours and Grandfather Mountain, the road gently curves and rolls, presenting motorists with magnificent views as it sweeps toward the sky.
Email ThisBlogThis!Share to TwitterShare to FacebookShare to Pinterest
Labels: Blue Ridge Parkway, cabins near Blue Ridge Parkway, Fall in the High Country, Linn Cove Viaduct, the Cabins at Healing Springs